1. The first and oldest window, installed in the chancel area in 1895, is a memorial to John P. McGuire, rector of South Farnham Parish from 1826 to 1852, during whose tenure St. John’s was built. It has long been described as a Tiffany window, although no identification can be found. Vestry minutes indicate that it resulted from a memorial fund for the purpose, and the carpentry contract for installation is dated 17 June 1895. In the c. 1972 renovation, the window was elevated from its original location above the now-central pulpit. It is of predominantly gold and amber colors, with extensive areas of a pale greenish-yellow. The principal object is a Latin cross in a wreath. Inscription is “To the glory of God and in memory of Reverend John P. McGuire. Born September 4, 1800 – Died March 26, 1869. Faithful rector of this parish from 1825 [sic] to 1852. Until the day breaks and the shadows flee away.” The window has an inward-opening hopper sash, now sealed in place.

2. In the third window of the nave on the (true) east side is a romantic rendering of two men in armor [David and Jonathan?]. The inscription is “We are the people of His pasture and the sheep of His hand. Ps. 95, v. 7. To the glory of God and sacred to the memory Benjamin Blake Brockenbrough and Austin Brockenbrough.” Sons of Dr. Austin Brockenbrough and his second wife, Frances Blake, Austin was killed at Gettysburg 2 July 1863, a 21-year old company commander. Benjamin, a younger brother, joined the famous 9th Virginia Cavalry in January 1863. The family members were among the early supporters of the Anglican/Episcopal church in the county. Benjamin (d. 1921) remained prominent until his death, and his wife, Anne Mason, continued that tradition of active support. Inward-opening hopper sash, now sealed. (All of those named are buried in the Blake-Brockenbrough family cemetery, adjacent to the Essex County Museum and Historical Society on Water Lane.)

3. In the fourth window on the east side is a depiction of Madonna with child and the inscription “To the glory of God and in loving memory Ann Leslie Thornton/Born July 24, 1873 – Died Febry. 22, 1897.” Inward-opening sash, now sealed.

4. In the east transept is the most recent of the five windows, c. 1973 depicting “St. Margaret of Scotland” (namesake of St. Margaret’s Episcopal School for girls, nearby) “In memory of the Anderton, Cauthorne and Latane Familes.” (No sash).

5. In the third window on the (true) west side of the nave, (opposite that of the Brockenbroughs) is a depiction of St. Luke and symbols of the medical profession—caduceus, “beloved physician,” an ox, etc. “In memory of William Roane Aylett and Sallie Clarke Aylett.” Dr. Aylett (of King and Queen roots) died 1942, and his wife, 1949. She had approached the vestry (VB, 19 Mar 1950 refers) with a proposal for separate windows; they cited the small size of the church and few windows to persuade her to consolidate into one. Installed c. September 1951. No sash. Horizontal support rods. Dark, rich colors; blue predominant.

6. In the fourth window on the west side, Jesus with children. “Suffer little children to come unto me and forbid them not. St. Luke xviii. To the glory of God and in loving memory of Rev. Henry Waring Latane Temple.” (Rector Temple died 1871.) No sash. This is the only window with a maker or source clearly identified: “Mayer & Co., Munich.” 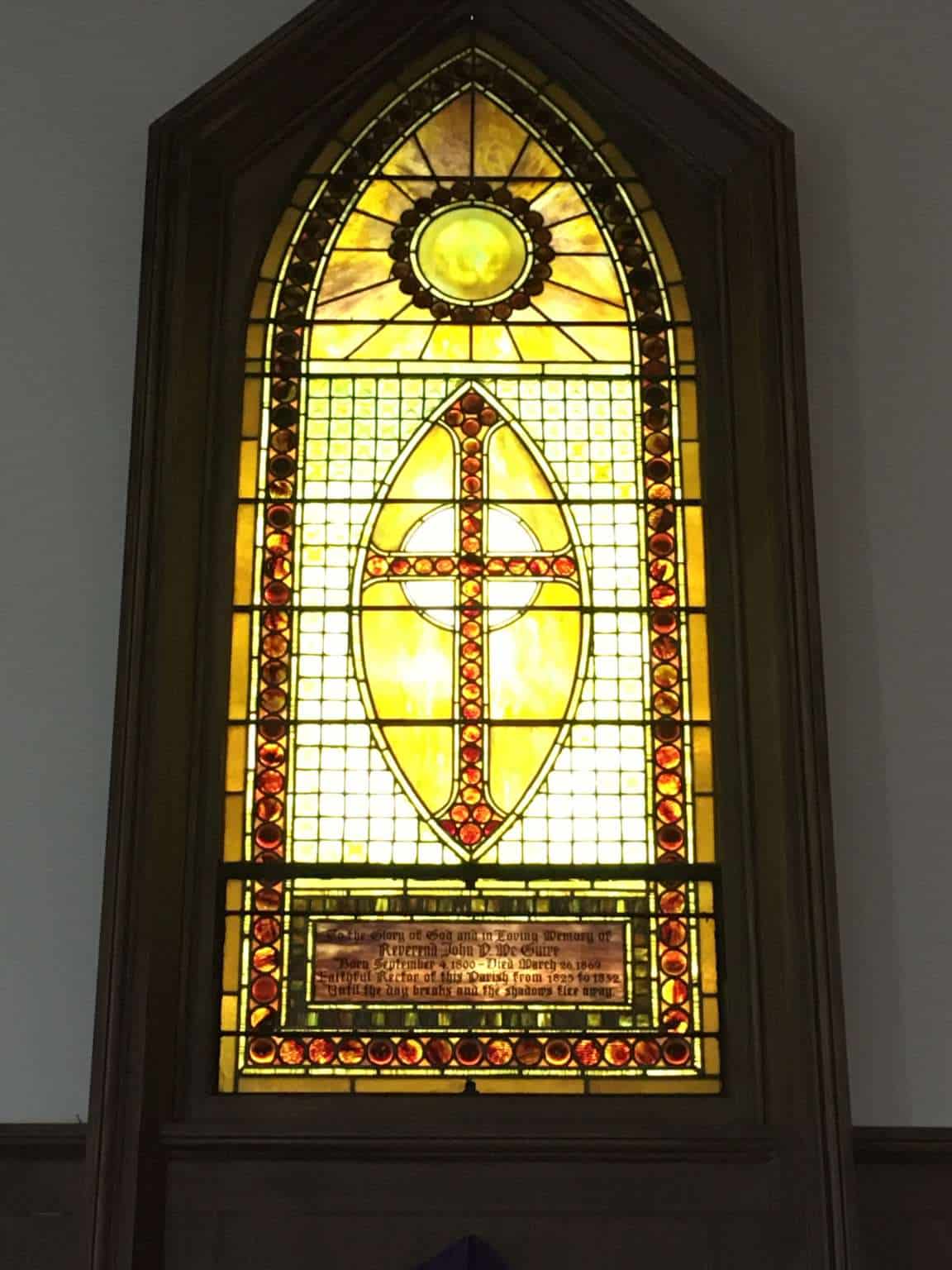 The Latin Cross 1895: Dedicated to the Rev. John P. McGuire, known as the “Apostle to the Rappahannock.” The artist is Tiffany Studios, New York, NY 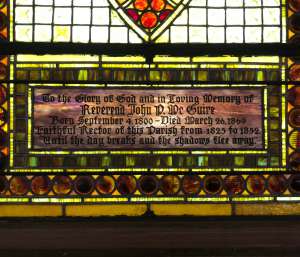 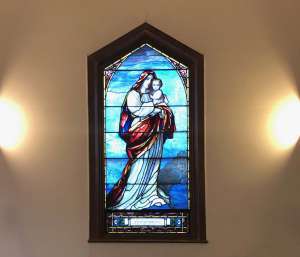 Madonna and Child Jesus Circa 1900: The artist is in the manner of the Tiffany Studios, New York, NY. To the Glory of God and in loving memory of Ann Leslie Thornton 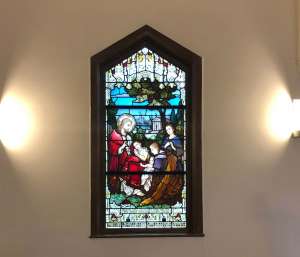 Christ and the Little Children Circa 1920: Depicts Christ blessing the children. The artist is in the style of Mayer/Zetter Studios, Munich, Germany. Dedicated to Henry Waring Latané Temple 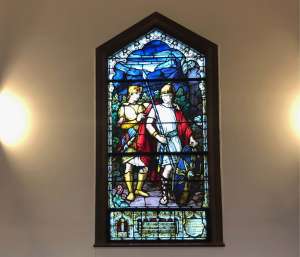 Soldiers in Armor Circa 1926: The artist is possibly German ( Munich style). A memorial to two brothers who served in the Civil War: Capt. Austin Brockenbrough, killed at Gettysburg, and Benjamin Blake Brockenbrough 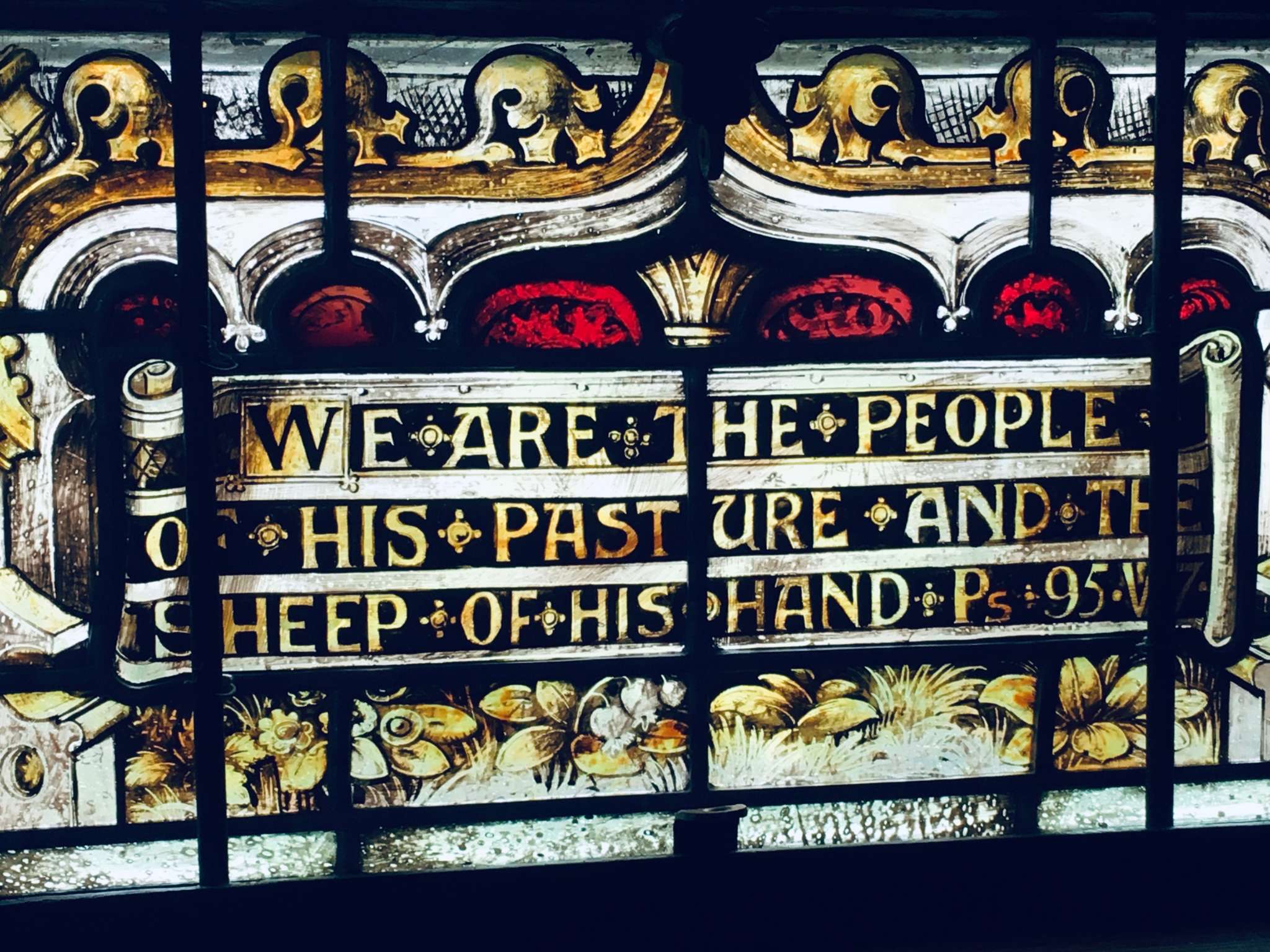 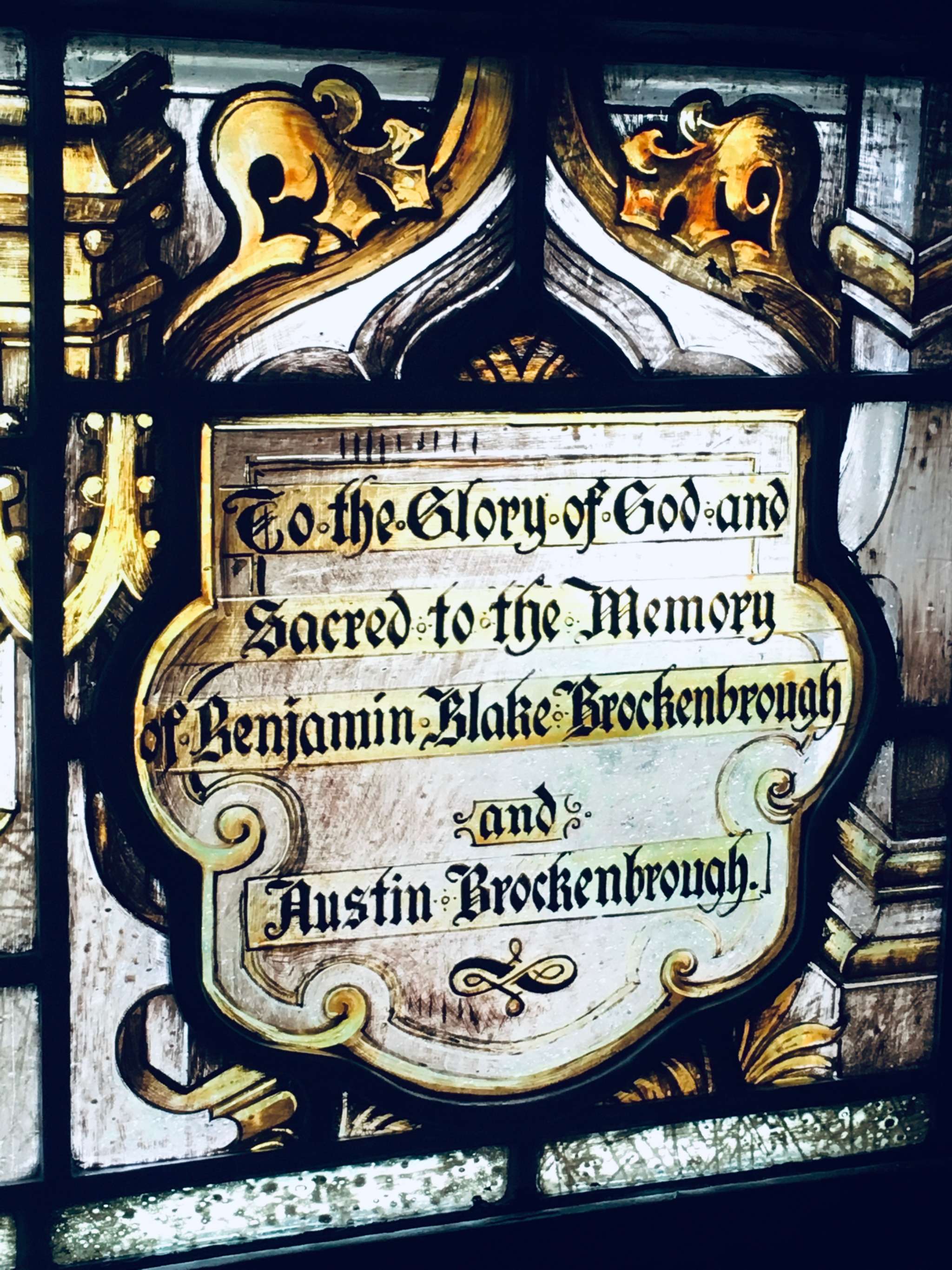 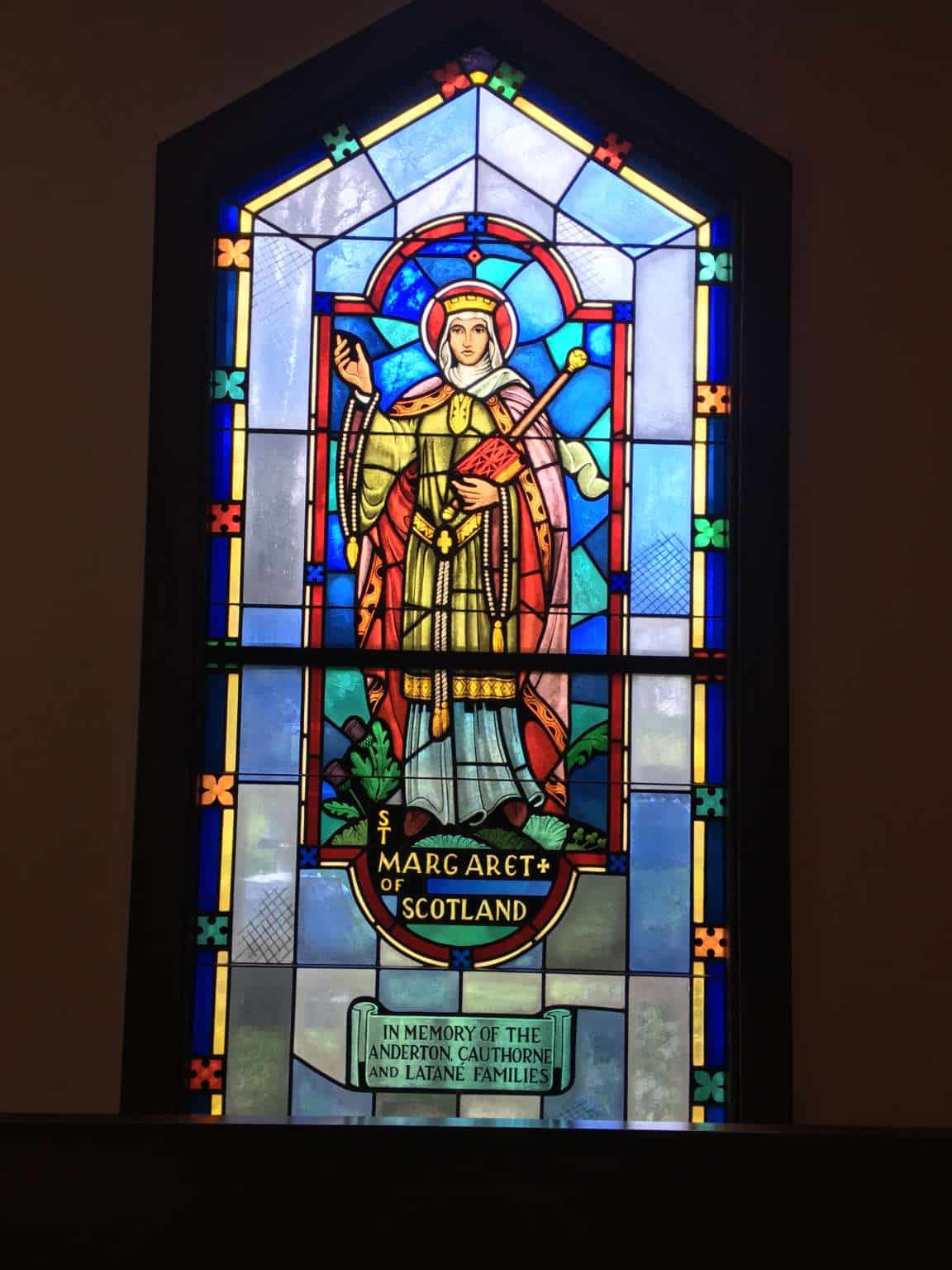 St. Margaret of Scotland Circa 1990: The artist is Willet Studios, Philadelphia, PA. Dedicated to the Anderton, Cauthorne and Latané families 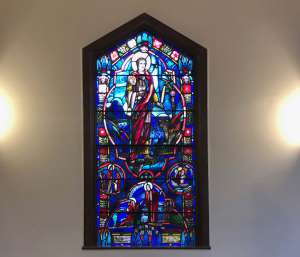 St. Luke Circa 1950: The artist is in the manner of Lamb Studios, Tenafly, and New Jersey. Dedicated to Dr. William Roane Aylett, who is buried in the cemetery as “The Beloved Physician.”