St. John’s was first established in 1820. Parishioners worshipped in the Town Chapel/Tappahannock Chapel, which was deeded to the Episcopal Church, but used by four denominations. In 1849, the St. John’s vestry decided to erect a new building to replace the Town Chapel and in 1850 the present structure was completed and occupied.

Currently, St. John’s is a small, active, and involved parish drawn together by our love of God and our desire to serve Christ in the world. Our church is composed of members and guests from Tappahannock, Essex County, and surrounding areas.

The mission of St. John’s is to grow in the knowledge and love of God and his Son, Jesus Christ our Lord; to worship, study, and pray together; to support and love one another as brothers and sisters in Christ; and by our words and actions to demonstrate God’s love for the world in Christ.

St. John’s Episcopal Church in the town of Tappahannock (Essex County) is located in the heart of historic Tidewater Virginia. Situated on the south side of the Rappahannock River, and visited by Captain John Smith in 1608—just one year after his landing in Jamestown—Tappahannock was founded in 1680. Tappahannock serves as a gateway to the “Northern Neck,” a peninsula lying between the Potomac and Rappahannock Rivers that is the birthplace of three presidents and many illustrious founders of our nation.

St. John’s is one of two churches established to replace the colonial buildings of South Farnham Parish that were lost during a lengthy period of confusion, impoverishment, legal entanglements and neglect that followed the Revolutionary War. First, in 1820, came the Town Chapel (a.k.a. Tappahannock Chapel), deeded to the Episcopal Church, and used by four local denominations. It has survived as the present site of Modern Cleaners. Next, in 1838, under the dynamic aegis of the Reverend John Peyton McGuire, a young Episcopal priest who was known as the “Apostle to the Rappahannock,” the cornerstone was laid for St. Paul’s Church in the neighboring town of Miller’s Tavern. In 1849, St. John’s Vestry decided to erect a new building to replace the Town Chapel. That October, land was acquired, and a year later, in 1850, the present St. John’s Church was completed and occupied. The Reverend McGuire, St. John’s first rector, is buried in St. John’s churchyard and memorialized by a Tiffany window above the pulpit.

In 1853, the first of several musical instruments at St. John’s—a small reed organ known as a “melodeon”—was installed in the church balcony. Numerous other improvements and modifications ensued. The parish hall at St. John’s was built during the 1930s. In 1972, the church was enlarged by extending the nave and adding transepts.

Historical continuity is maintained in the old parish name, South Farnham, and in the membership rolls which include long-affiliated families, among them descendants of the Reverend Lewis Latané, Rector of South Farnham Parish from 1701-1733. Our present church has been welcoming worshipers continuously since it was built in 1850.

We are proud of our beautiful church. It is one of the very few Episcopal churches in Virginia that is built in the “Carpenter Gothic” style. The vertically aligned wooden siding and tall steeple crowned by a cross remind us of a traditional spiritual orientation toward God in heaven above. Inside our church, in addition to the Tiffany window with cross commemorating Reverend McGuire, are five lovely stained glass windows that represent Biblical scenes and personages. Our newest stained glass window, depicting St. Margaret, recalls our close affiliation through many years with St. Margaret’s School for girls in Tappahannock.  St. John’s is part of the Historic Walking Tour of Tappahannock that includes 13 buildings dated between 1680 and 1850, all located in downtown Tappahannock.

Come visit with us. We would be proud to share with you our voyage of faith in our beautiful historic church.

Surrounding the St. John’s altar rail are thirteen kneeling cushions with a different image on each one.  Twelve of the kneelers are 36” X 11” in size and the thirteenth cushion, the eagle, which fits in the center of the rail, is 31” X 11”.  On the back edge of the eagle cushion is the following dedication for all of the kneelers: “In Memory of Sara (Wheelright) deShields Fisher”. Other designs include an angel, a sheaf of wheat, a crown, a goblet, a rain cloud, and a lamb. The remaining symbols are a lily, a scallop shell, a fleur-de-lis, a bunch of grapes, a fish, and an open book. Some of the images relate to the Rite of Holy Communion, and others to general Christian imagery of Christ the King and Christ the Lamb of God.

The needlepoint patterns were created by staff members of the National Cathedral in Washington, DC at the request of Mrs. Fisher’s son, Henry deShields Fisher. Mr. Fisher furnished the supplies for the cushions.

The kneelers were created by members of the Women of the Church in 1981, with Evelyn Chinn spearheading the project.  Mrs. Chinn did all types of needlework, but her big interest was needlepoint. She often visited other churches to see what handwork they had done and to get ideas. Several of the cushions were completed by Mrs. Chinn while others were sewn by Constance Gawen, Ann Burgwyn Hundley, Elsie Lewis Rennolds, Ann Toole, Mary Gresham, and Betty Sheehan. Two initials could not be identified, PS and AAA, and three of the kneelers were left unsigned.

These cushions were truly a labor of love and a gift to be treasured for many years. 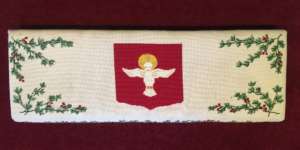 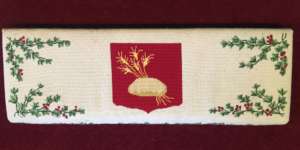 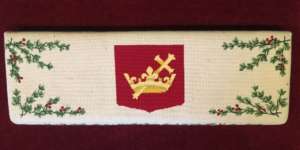 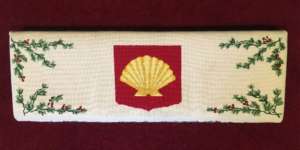 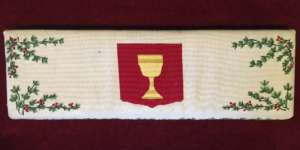 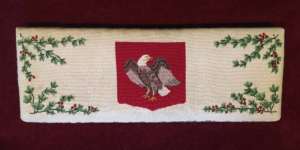 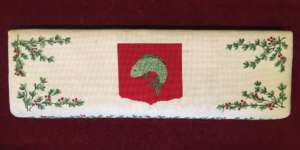 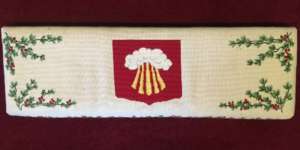 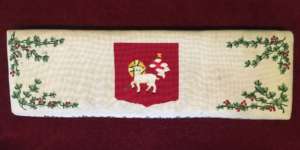 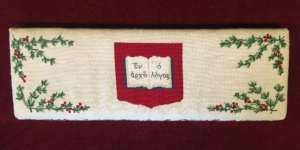 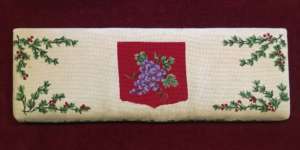 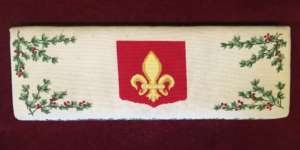 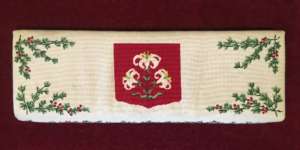 Often overlooked, the importance of a parish cemetery can scarcely be overstated. Current and future parishioners, as well as visitors, can “read” so much of the history of the church in the grave monuments of former parish members and, sometimes, the priests who faithfully served them.  Indeed, a walk through St. John’s Cemetery is a walk through the history of our beautiful old church, beginning with the grave of the Rev. John McGuire, known as “The Apostle to the Rappahannock,” who was St. John’s first priest when the church opened for services in 1850. If present or former members are interested in making an arrangement for burial in St. John’s Cemetery, we invite you to contact St. John’s Church and ask to speak with the Chairman of the Cemetery Committee. 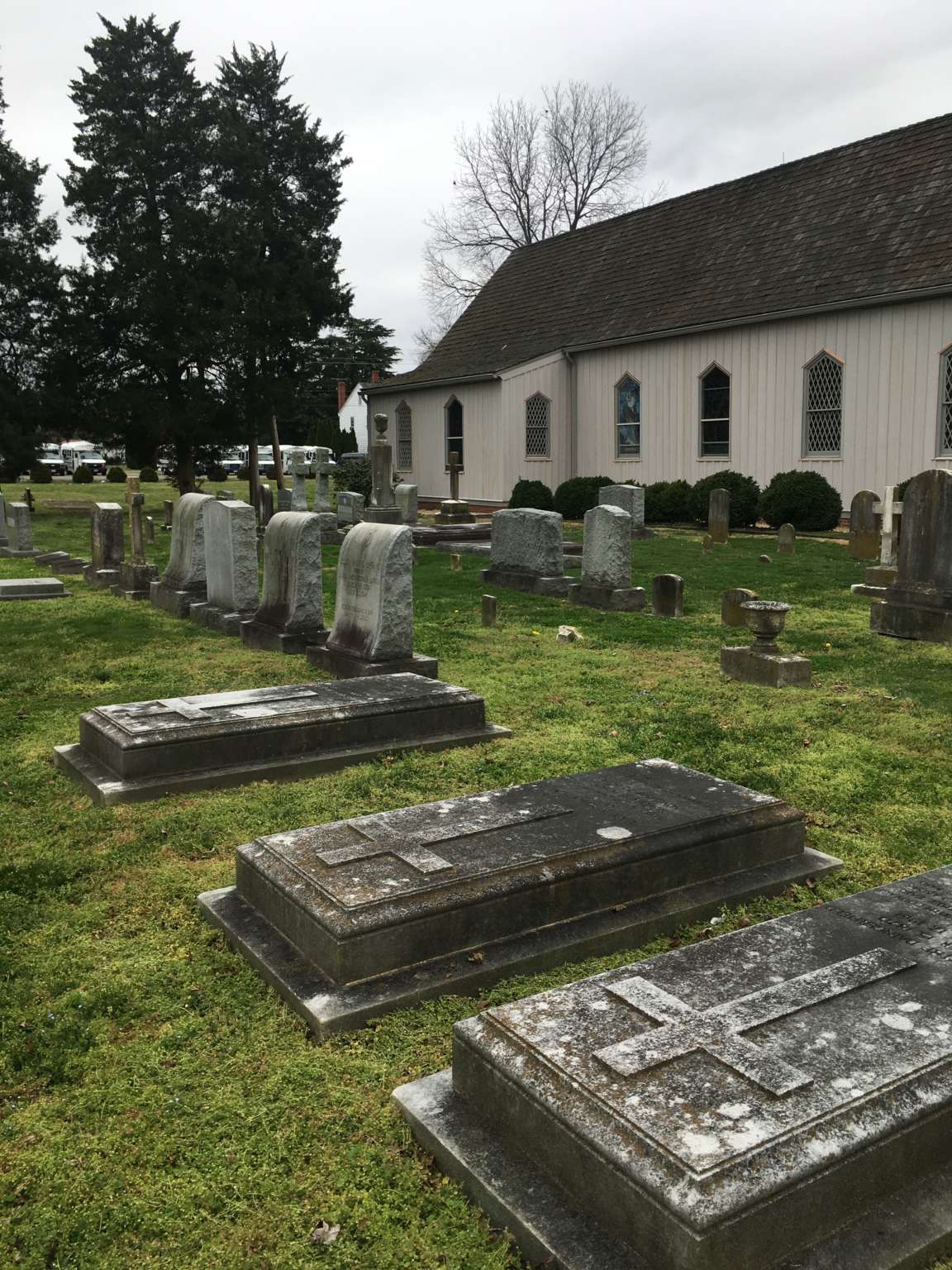 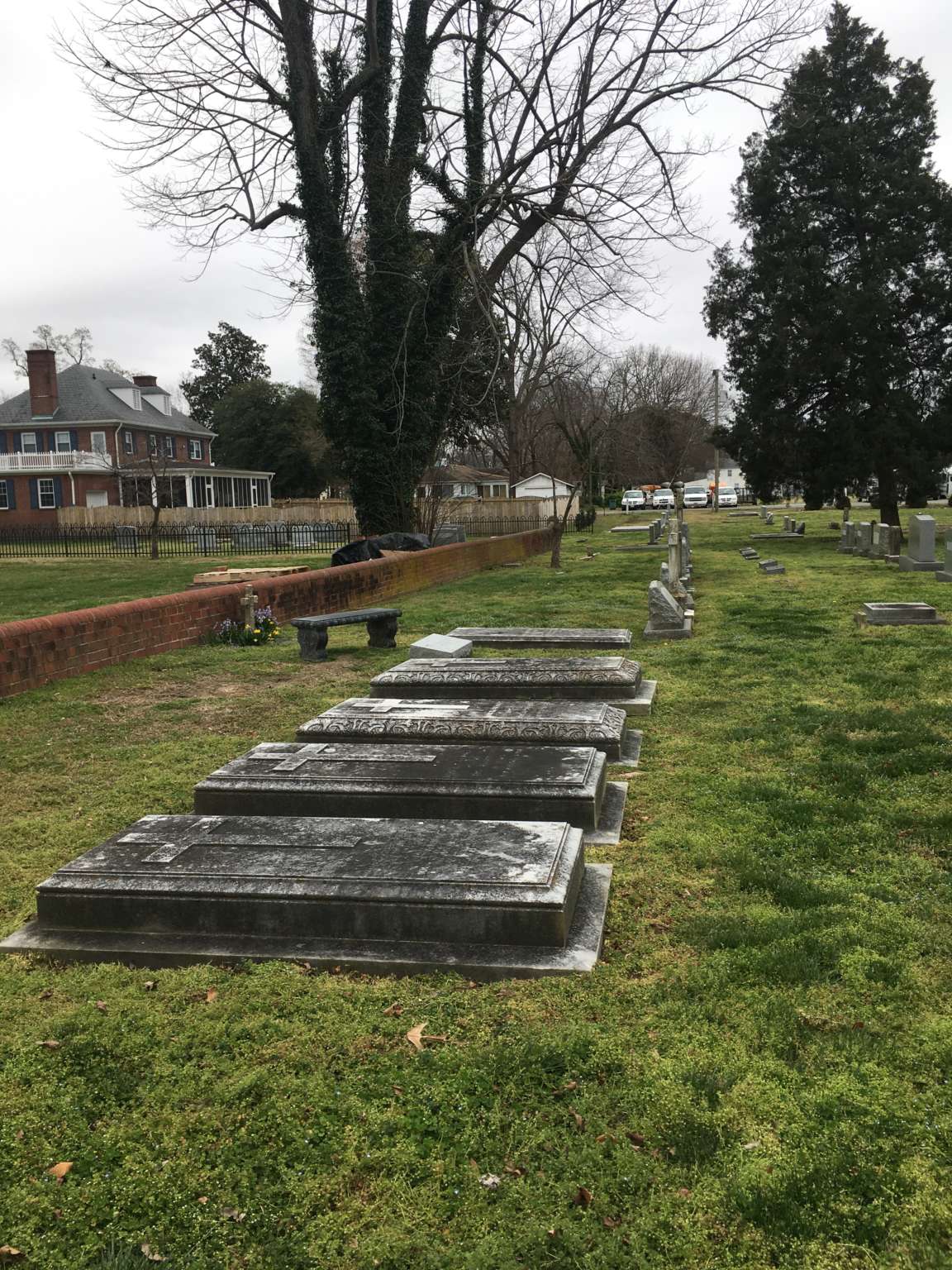 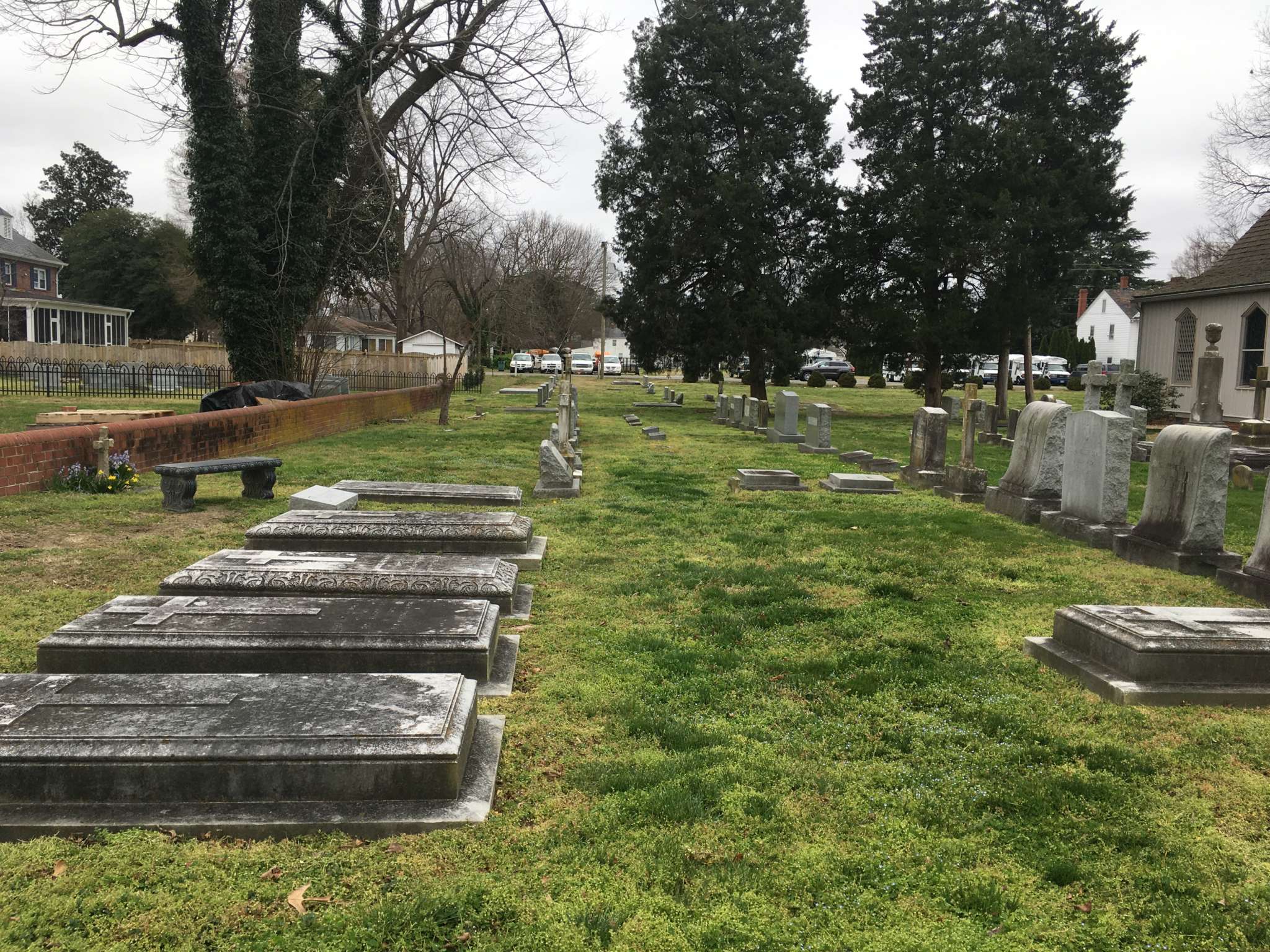 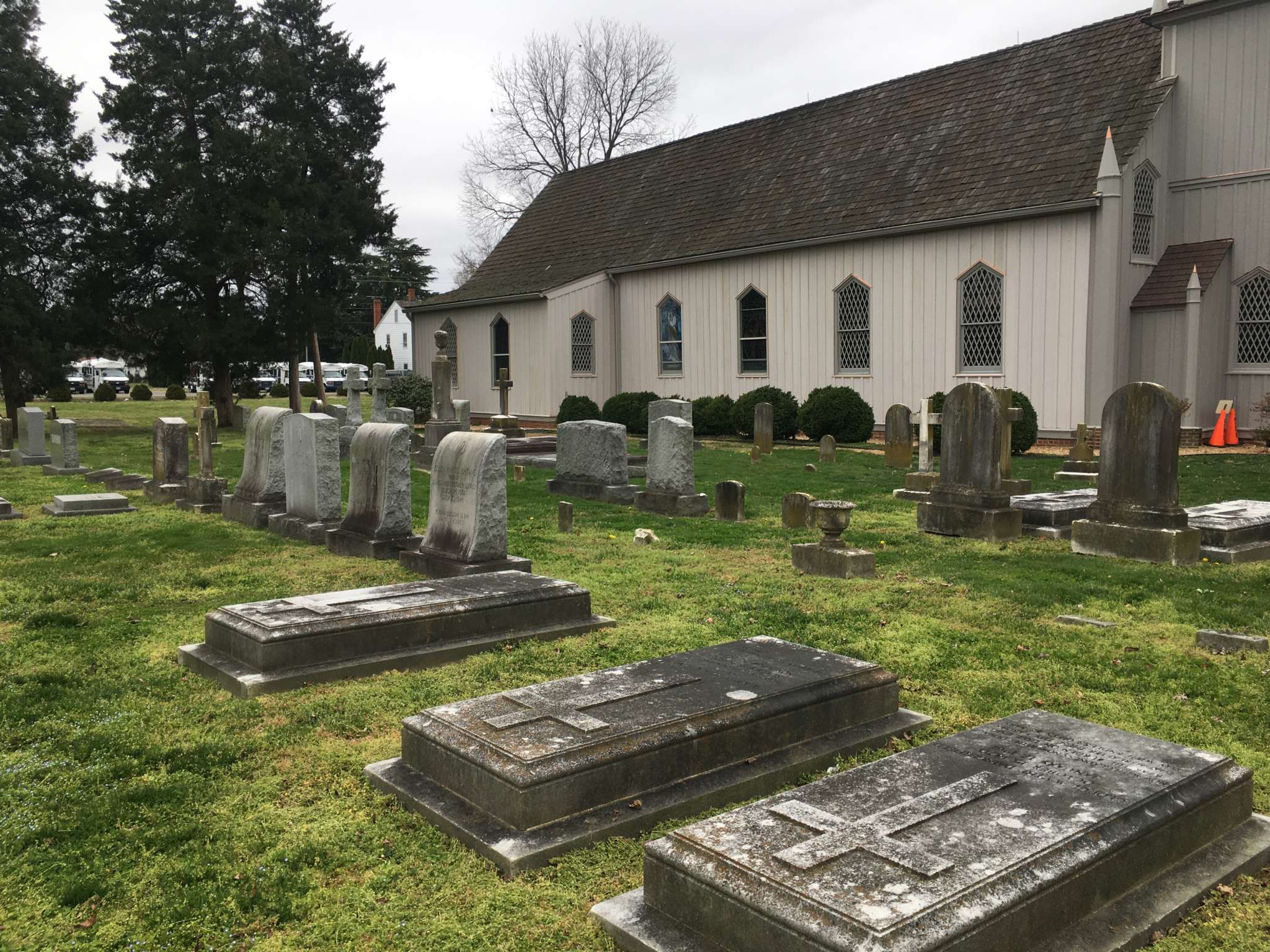 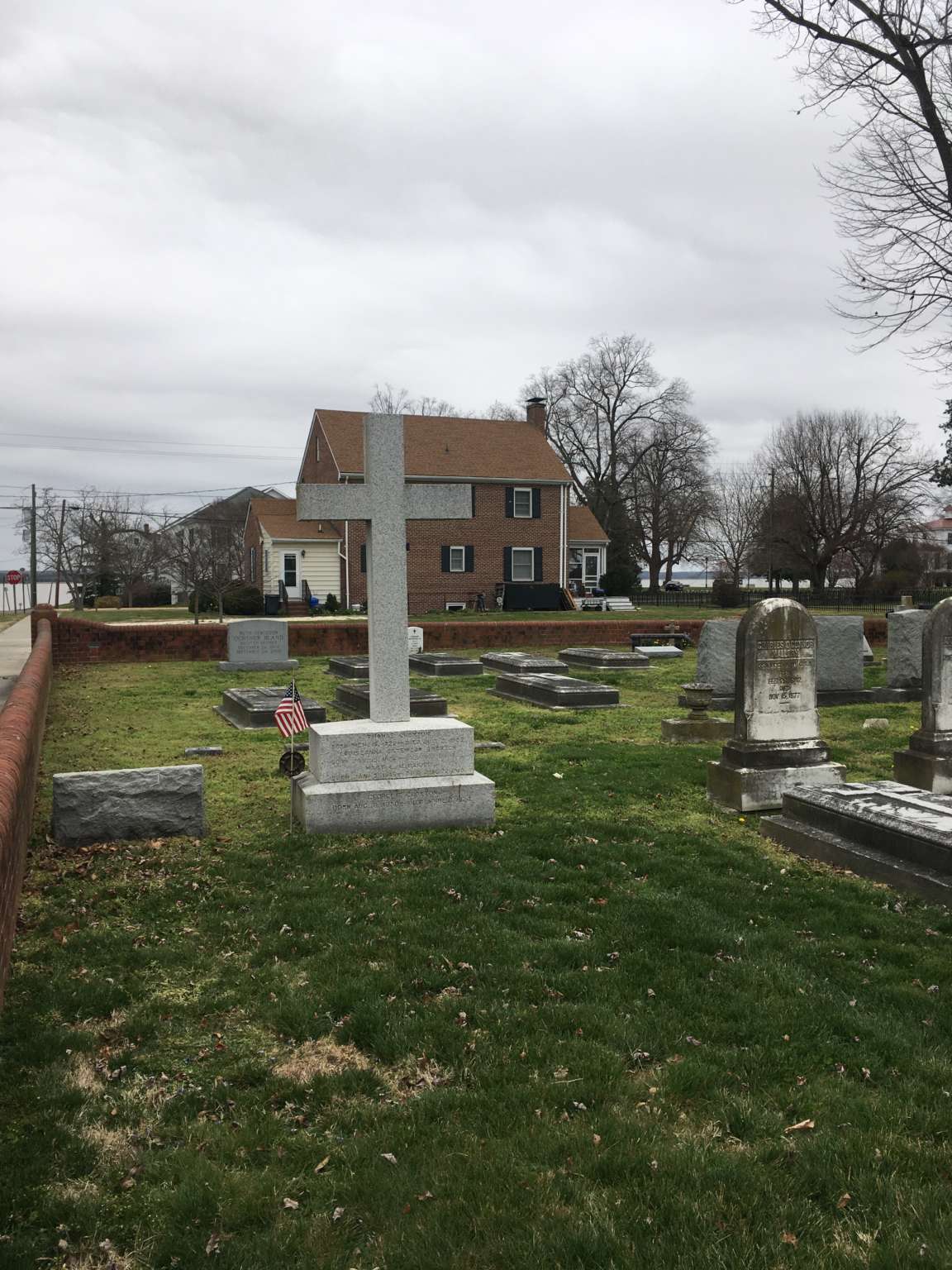 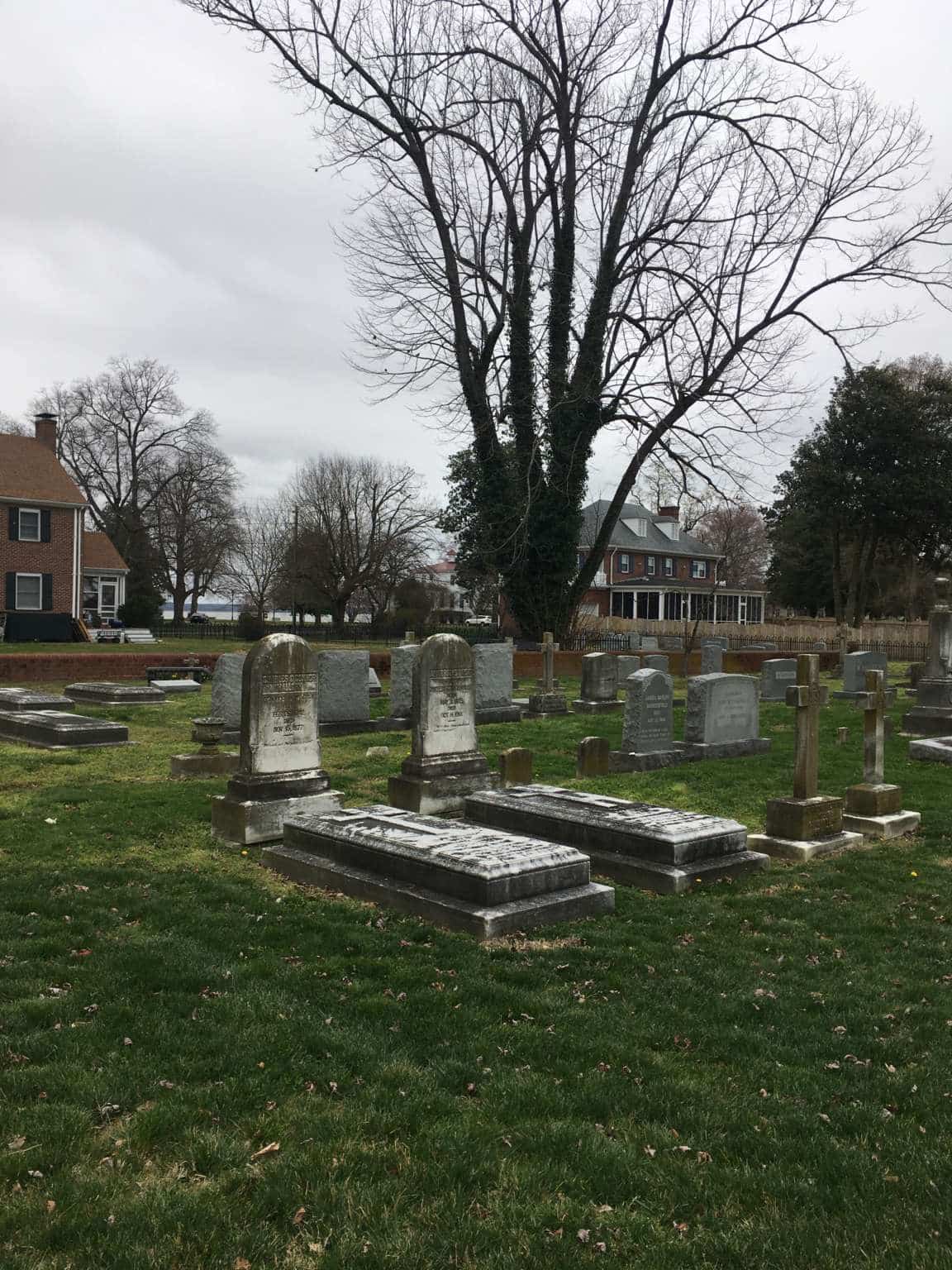